The main advantage of using a SLR camera for this type of image is – as always – image quality. These cameras are capable of capturing very sharp images and in a wide variety of light conditions. In addition, you can manually specify each exposure setting so that it is fixed for each image.
However, image quality is paid at the cost of more complicated shooting conditions. Since the device and its lens are less collected, a specific device for holding and positioning is necessary so that the rotation can be done around the nodal point. The “spherical” panoramic heads are now democratized, even if the price is often not negligible.

Several models of panoramic heads are available on the market. All panoramic heads called “spherical”, that is to say, to orient the device in all directions, are usable. It must of course be compatible with the camera used (refer to the instructions of the manufacturer).
The configuration should look like this: 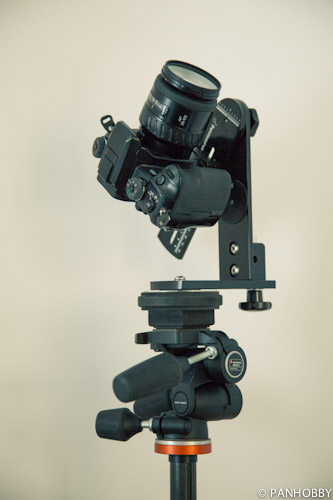 We will take several views in sequence so as to cover all possible directions, and thus be able to reconstruct the entire space. For that, it will be enough to act on the various degrees of freedom of fixation and each time to take a picture.

DETERMINATION OF THE NUMBER OF VIEWS

The determination of the number of views is a little more complicated than with a Gopro camera because it must take into account the focal length used. My recommendation is not to be burdened with theoretical calculations, but rather to determine the angle of rotation on the ground. It is enough to determine approximately the angle of rotation necessary so that two successive images are superimposed of approximately 20 to 30%.
For example, with a 24×36 camera in vertical use and a focal length of 28mm, it will capture at least 3 rows of 13 photos, as well as photos for the peaks.

In general, the assembly of the images will be all the easier and more qualitative as all the shooting parameters are constant during the capture sequence. To set the average exposure, the camera must be set to manual mode (M mode), the aperture fixed and then rotating the camera successively in all directions, the average speed must be adjusted. The same approach can be followed for focusing and for white balance.
Example of camera setting:

When all previous operations have been performed, shooting is possible. I recommend using a soft trigger to speed up the capture sequence. It is indeed preferable that the complete capture sequence is fast to avoid that variabilities appear between the images (example: change in light conditions, people in motion, wind, …).
Apart from a specific case, my preference is to capture the images starting from the horizontal line at 0 ° and then the row or rows inclined upwards, to continue and finish with the row or rows inclined downwards.