The Insta360 company has made a name for itself with the general public with its famous Insta360 ONE X. This manufacturer has just announced its latest, the Insta360 ONE R.

This camera is distinguished by its modular design which allows it to be used as a 360 camera and also as a 4K action camera. This clever approach clearly demonstrates Insta360’s desire to nibble Gopro’s market share in the field of action cameras.

I suggest you examine here the new concepts proposed by this camera, taking a little height, and without focusing on each of the detailed technical characteristics. 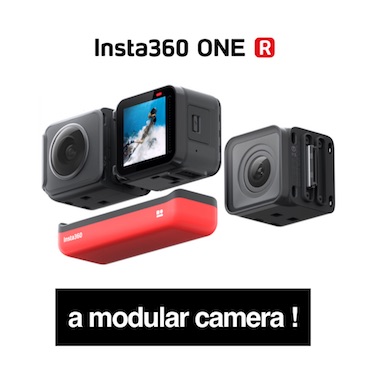 The modularity of this camera is the characteristic that we discover first. Insta360 has decided to decompose it into several modules which must be interconnected with each other for dedicated use. The main modules available are:

You already understood, the minimum association to constitute a camera includes a controller module, a sensor module and a power supply module. 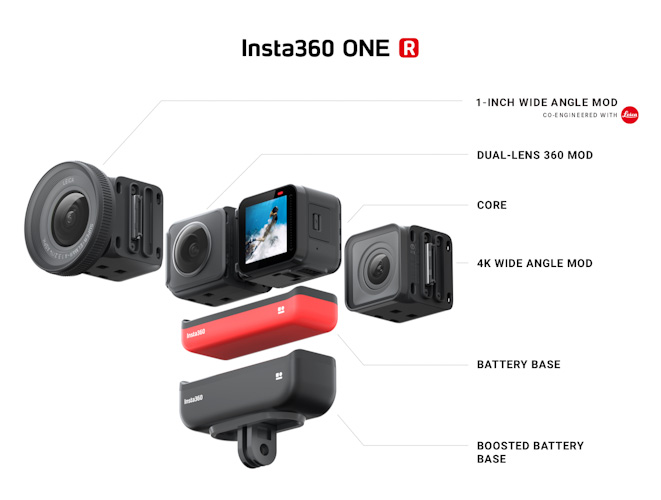 This modularity represents a considerable commercial argument since the buyer can have the perception of a better durability of the elements that he buys. This is also applicable to ecological buyers since better reuse of the elements goes in the direction of reducing its waste.

It remains to be seen to what extent Insta360 will push the exploitation of this modularity. At this stage the idea does not seem to be pushed to its maximum, the modules can only be purchased together for predefined camera configurations. But we are only at the beginning, probably that the coming months will allow us to quickly see if the customers are attracted by the approach, and consequently, to see the evolutions that will appear. 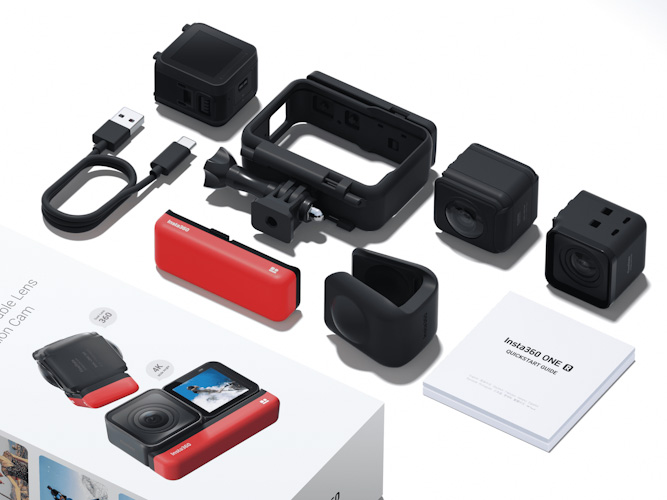 The reliability of this device could also be a question. The experience will allow to know more.

In addition, this modularity also opens up the opportunity for the creation of any new module. To illustrate this idea, Insta360 already offers additional modules such as an extended battery module or a module allowing 3D capture. On a similar order, we find the mounting system of the sensor module 360 on a drone. 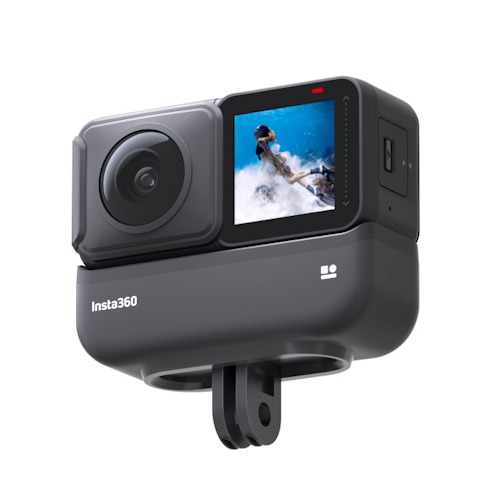 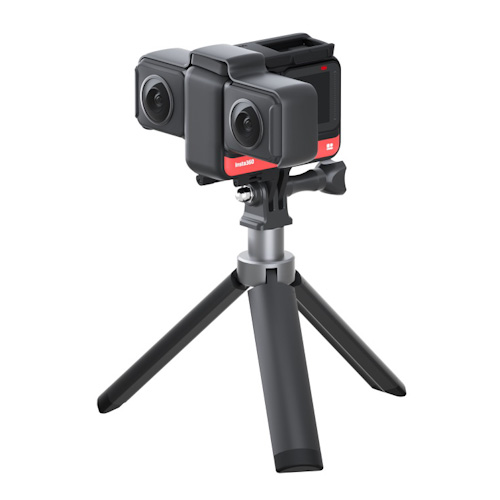 A crucial aspect for the democratization of 360 is the ergonomics and the simplicity of use of the camera. As such, the integration of a touch screen, allowing a more autonomous camera, without associated smartphone, is a decisive progress. This new Insta360 ONE R benefits from the experience acquired with the ONE X. 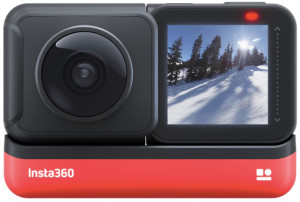 To discover the graphical interface of the camera, I offer this video of Shanil Kawol which goes through all the menus.

The Voice Control function allows you to control the camera by voice, which is very interesting or even essential when you have your hands taken. Triggering a photo or video is extremely simple, you just have to remember key words to pronounce. With my Gopro Hero, I commonly use this feature, and I am quite amazed by its good functioning, including in a moderately noisy outdoor environment.

According to the various tests available, the image quality is improved compared to the Insta360 ONE X. However, the technical characteristics, such as the resolution, being identical, the improvements obtained in particular thanks to the processing algorithms are interesting without necessarily to be revolutionary.

This video by Shanil Kawol for lets you see for yourself the image quality.

Another aspect which currently represents an obstacle to the democratization of 360 ° cameras is the time, which must be devoted to post processing, to transform a 360 video into an interesting traditional video sequence. I’m not talking about 360 viewing using a VR headset, for example, but standard format video from a 360 capture.

The new Insta360 ONE R tries to provide an answer to this problem by providing automated editing and automatic subject tracking functions, Artificial Intelligence (AI) algorithms are used to automatically determine the most interesting sequences and areas . Even if the results are perfectible, they allow to have a first assembly which can then be improved manually.

Other functions offer predefined animations (rotating planet, jump of an individual from one planet to another, stop motion …) that can be created very simply and above all very quickly. 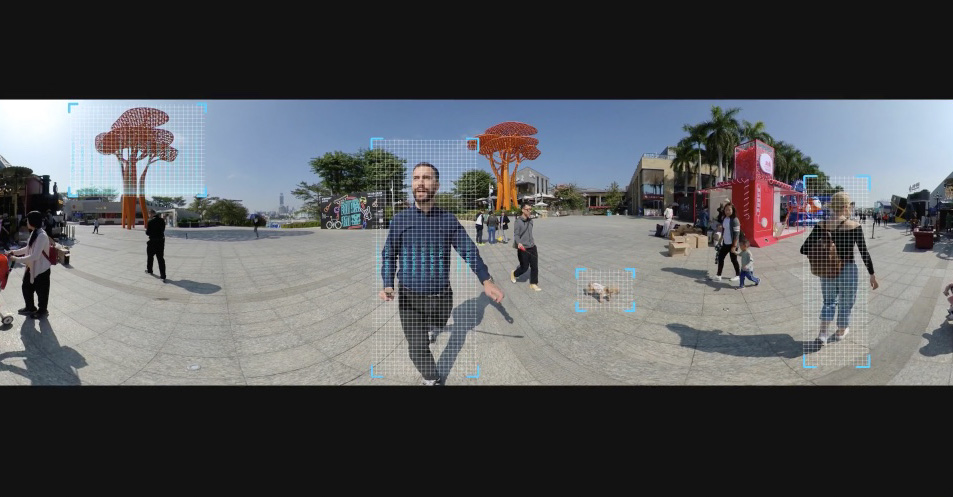 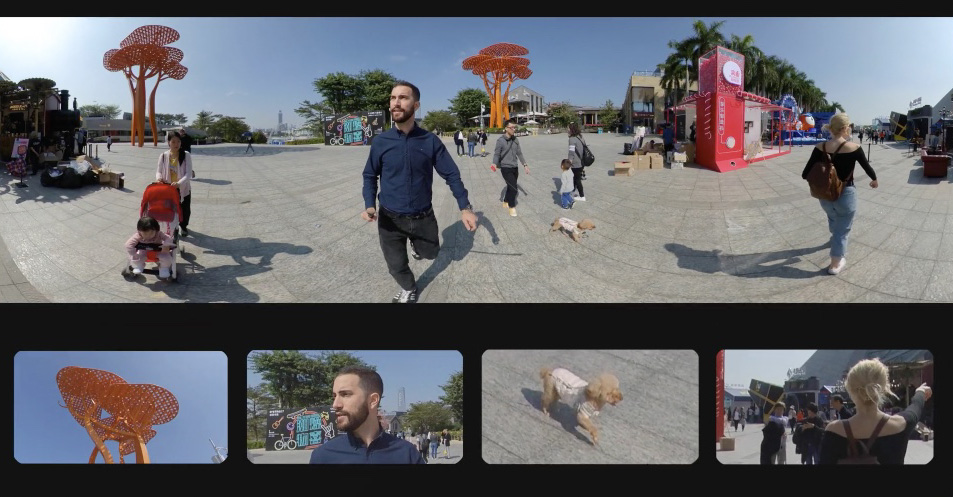 It is a safe bet that improvements in the field of AI will make it possible to significantly enrich the possibilities for automating the use of 360 cameras.

This gives you an overview of the new features of this camera, there are many other functions available (stabilization, bullet time, night mode, slow motion, etc.), for an exhaustive list of technical characteristics, I suggest the website manufacturer Insta360.

All images are credited to Insta360. 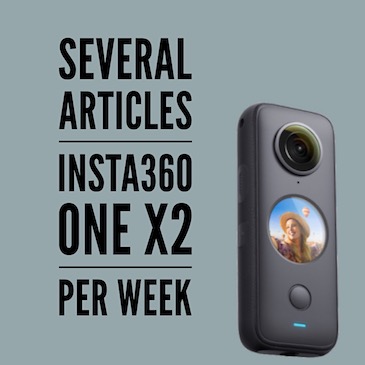 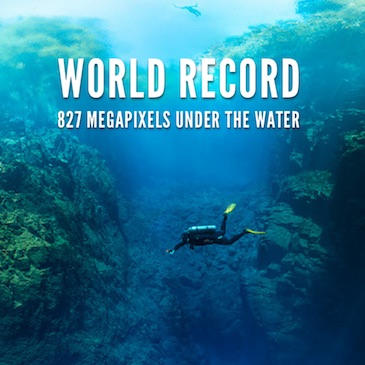